We picked up the hire car this morning and were a bit disappointed to find it had no sat nav as we had requested.  Fortunately, our ‘phone plans cover Australia, so we could plug them into Apple Play and get by on Google maps.  Perth is not a busy city by any means and was easy to navigate our way out of.  We were quickly out into the country and driving on deserted roads.  There is so much SPACE here!  It is also much greener than we expected, although the earth is deep red underneath.

We drove past fields of grey merino sheep along roads dotted with pretty blue and yellow flowers – all unfamiliar to me, so no names at this stage I’m afraid!  The phone was running on 4G for a while, then 3G and then … no signal at all.  Our map of WA is OK for basic direction finding, but we wanted to find the Dryandra Woodland and there was just no way it was going to get us there. 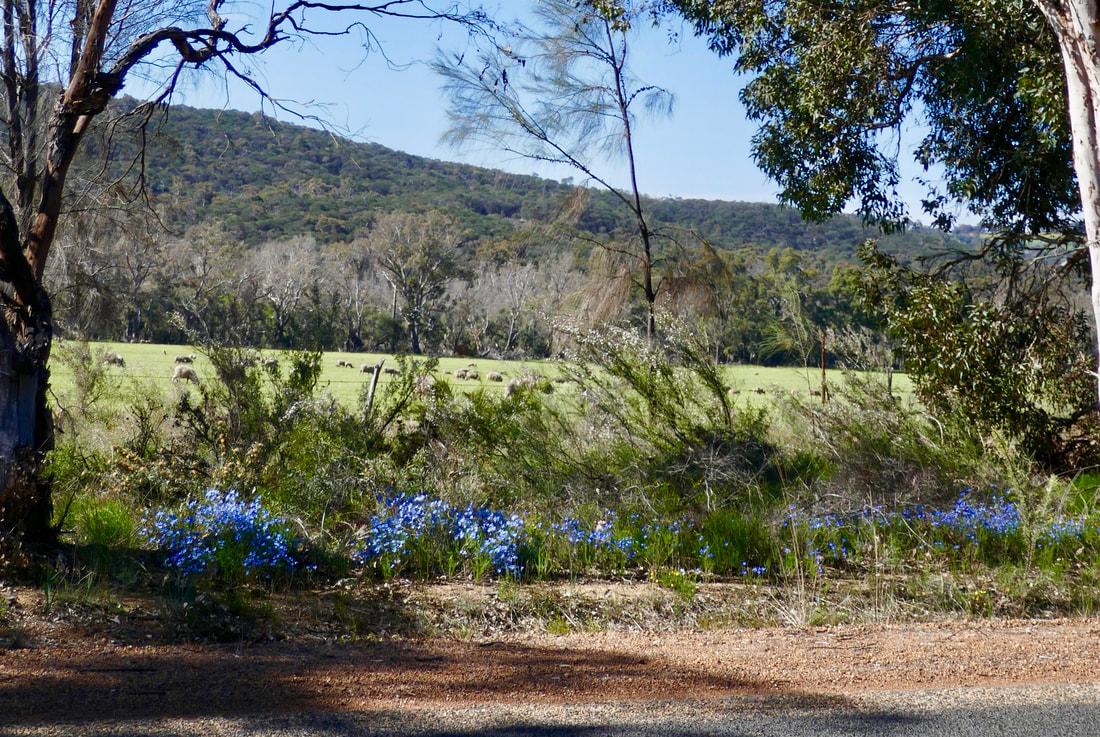 We managed to get to the small hamlet of Brookton and found coffee, public toilets and a shop with a large scale map, so our luck was in.  The newsagent gave us rough driving directions to the Dryandra Woodland although he had never been there himself:  “Get as far as Pingelly (pronounced Pinjelly – as in the wobbly stuff), head down to Popo (alias Popanyinning) and talk to Bruce – he’ll see ya rite!”  We bought a couple of packets of Extra Strong mints just in case Bruce was on walkabout  when we got to Popo and we got lost in the bush.

The Dryandra Woodland is a special place – the largest remnant of original woodland in Australia’s Western Wheatbelt.  It is one of the world’s flora and fauna hotspots with more than 100 species of birds, 850 varieties of wildflowers and many rare and endangered native mammals.  It had been damaged by fire recently when we found it,  but that added to its charm somehow.  It is the sort of place to experience with all your senses – a place to slow down and enjoy the ride.  The air is full of birdsong, the flowers pop with colour and there is an all pervading sweet, earthy smell of a forest floor in late Spring.  It is a good place to linger for a while and feel the bark of the trees as the leaves crunch under your feet.  Interestingly, they do guided night walks by torchlight here – pre booking essential – where you can see many of the rare nocturnal fauna.  If we had the freedom of travelling in a campa van, we could maybe have spent more time here …?

The road wound on through enticingly named towns like Marradong and Dwellingup and eventually led to our next stop on the coast – Mandurah.  We could have reached here in about an hour and a half driving directly down the coast, but the slow road yielded more interest.

Highlights:  Seeing our first wildflowers in the Dryandra Woodland.
Lowlights:  The dry red earth gets EVERYWHERE.  The flies are annoying – not as bad as they would be in Summer, but they buzz around all the time, trying to get into your ears and nose to find some moisture.

Mandurah – although a pretty place right by the sea – was pretty well deserted.  We had  the Seafood Nation Dolphin Quay restaurant entirely to ourselves.  We ordered fish and chips twice, but the seafood platters were on special offer on Mondays, so we accepted the offer and were presented with a massive platter that could feed you for a week.  “We’ve cooked it – so might as well pile it all on for ya!”

Kalgoorlie to Perth – Rough and Tough