By morning, we had arrived at the little goldrush town of Skagway. We joined a tour to hike part of the Chilkoot Trail. This was one of two routes followed by the Klondike goldrush stampeders in 1897/8. The other was the White Pass.

The Chilkoot Trail goes from Dyea and The White Pass goes from Skagway. The Chilkoot trail is a bit shorter, but the White Pass was accessible by horses. either way, it was a very tough trail – “one way is hell, the other is damnation”, as the saying went.  It is amazing what hardship the gold rush stampeders were willing to endure in the attempt to get rich – or just make some sort of living.

The Chilkoot trail is very steep and we only climbed the first few miles and in good weather.

It gets very much steeper after that for the remainder of its 33 gruelling miles. Imagine doing that in snow and freezing temperatures!

The peaceful hike rewarded us with a wide selection of forest vegetation: mushrooms, tall cranberries, devil’s club (not good to encounter – very prickly!), lungwort lichen, gooseberries etc. Trees grew on rocks – If only they could talk of the history they had witnessed over the years! 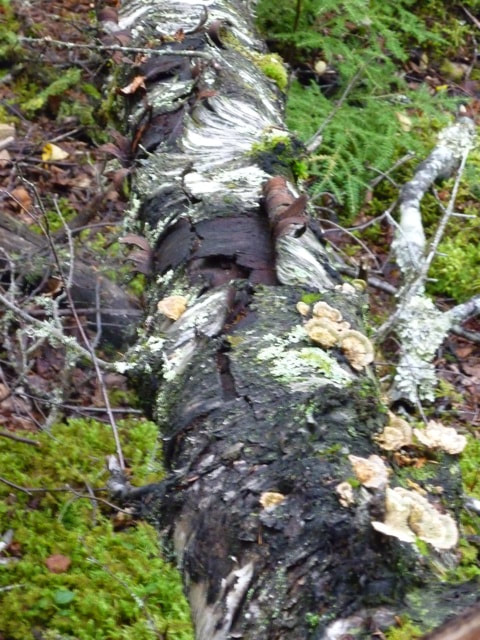 We saw bear prints in the mud and fresh bear scat – a bit scary – very glad we were with a guide! It was a black bear print – rounded pad and no long claw print. The bears in Denali were grizzly bears – well, if you had to live on a diet of just blueberries (no salmon in Denali), you would probably be pretty grizzly!

As the stampeders had done before us, we made the return trip by float down the silty green river, which flowed very fast in places and had a wide tidal range – easy to get beached as happened to the couple in the book I have now just finished.

We managed to capture a bald eagle on the camera as we finished to trip – a good end to a great trip.

You can learn all about the Klondike Goldrush at the Skagway Museum in the centre of town and it really is a fascinating story.

In an attempt to prevent starvation, the authorities at the time of the goldrush required all men to carry all their requirements with them for a whole year so that they wouldn’t have to depend on any other man for survival.

It was a good job that they were self sufficient as there was stiff competition on the tail and a reluctance to help out a fellow stampeder.

They let their horses die on the road, which was littered with horse carcasses in places. Carrying a year’s supplies entailed many trips backwards and forwards up the trail – men would have to retrace their steps 20 to 40 times, depending on the size of the load they were prepared to carry each time.

For all that exertion, very few actually got rich. Most ended up mining for someone else and spending what they earned in the brothels and saloons.

The population of Skagway now is 965, which swells to double that in the tourist season. during the goldrush, it soared up to 30,000!

The people who really got rich were the owners of those not too salubrious establishments.  It must have been a pretty awful place back then. Nowadays, it is a reasonable little town, making its money from tourism including the many visiting cruise ships.

ALASKA - FINDING YOUR WAY AROUND