We had 2 nights in Wick, which allowed us time to tick the box of visiting John O’Groats.  We saw a family waiting to welcome back their Dad & his friend Phil – End to Enders – it is 874 miles to Land’s End from here.   If you headed straight down, it is 12,875 long miles to New Zealand …

​John O’Groats was actually a bit prettier than I had expected and Duncansby Head – 2 miles east – was worth the walk.  There were seals swimming in the sea, a lonely lighthouse and spectacular cliffs with impressive sea stacks the smallest of which is affectionately known as Tom Thumb.  Walking in the other direction brings you out on a lovely shell beach where – if you are lucky – you can find a groatie buckie shell.  They eluded​ us today – you need groatie eyes to find them, apparently. 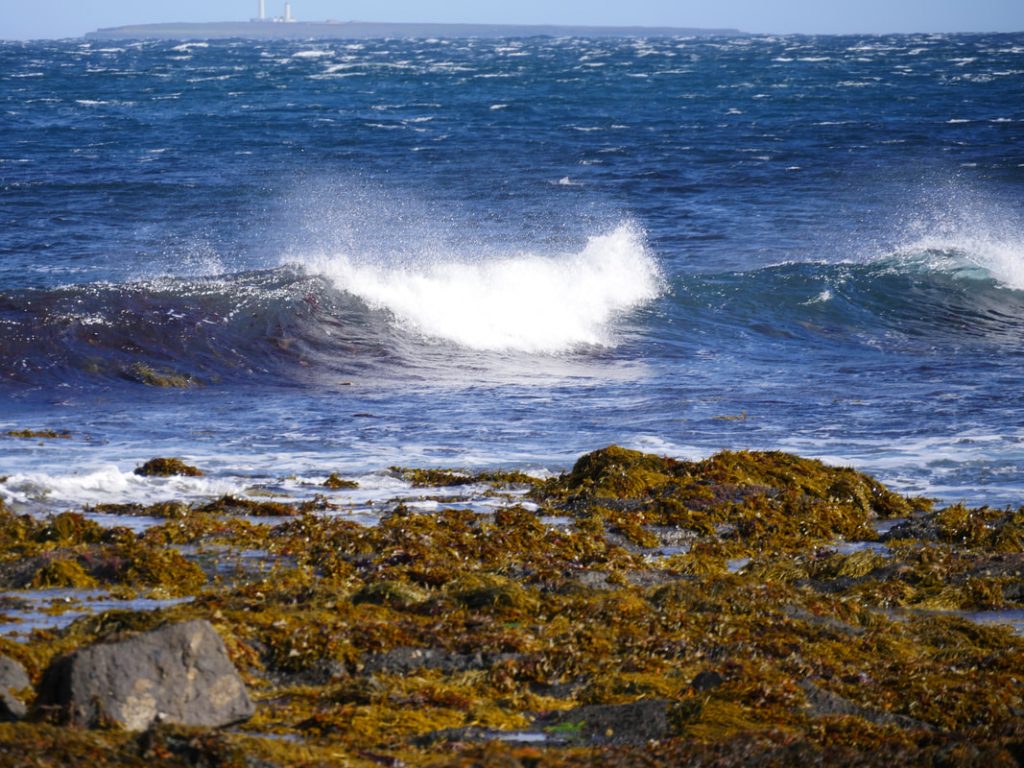 Wick Heritage Centre was worth the trip in the afternoon, It has a huge collection of old photos which capture the heyday of the fishing boom well.

Then, we walked up to Old Pulteney Distillery – the most northern distillery on the Scottish mainland.

The whisky has a hint of sea air and a slightly salty taste – hence it is known as the maritime malt.  You can sample all the bottling at the Distillery before you decide which one to treat yourself to.  The old familiar bottle with the waves around the bottom is sadly going out of production.  The 17 year old whisky will probably all be sold by Christmas (so we bought a bottle, for old times sake).  The new marketing is focussing on 15 and 18 year old whiskies.  The 15 year old tastes of Christmas spices and has a lovely long finish, so we had to have a bottle of that too.

The prettiest bottle was the 40th anniversary whisky, bottled in blue glass with sterling silver waves blown into the base – stunning marketing.  The website describes the taste in gushing terms: “All variants of Old Pulteney are intriguing but this 40-year old is uniquely complex. Its nose; fruit, butterscotch, oak, pears, cloves and spices; flood you like waves over Wick’s protective wall. Its taste; sweetness, spices, brine, orange, toffee and more butterscotch; the perfect storm. Its finish; sweet spicy, sherry and orange; as long as a trip to sea.”  At £1500 a bottle – we will just have to imagine  the pleasure.

Cullen Skink – A tasty, creamy soup made with smoked haddock, potatoes and leeks.

Stroma – A whisky based liqueur with added honey made at the Old Pulteney Distillery.

Ganzies – Fishermen’s jumpers.  There were some lovely inky blue examples in the Wick Heritage Centre.  The stitch patterns get more complex the further North and more remote you go.

A walk along Reiss Sands with a rainbow over the waves and a couple of seals for company brought the day to a relaxing close. The friendly barmaid at the Mackay’s hotel gave me a groatie buckie shell too which hopefully will bring me as much luck as if I had found it myself!

Life on the Edge – Faraid Head