Northumberland has such a lot to offer for a short break in the UK.  Probably because of its northern location, this AONB remains much more unspoiled than many other regions.  Visiting at the end of September, we saw very few tourists and enjoyed some very pleasant warm weather.  For long, relaxing beach walks, there are few better places to base yourself than Berwick-upon-Tweed.

We based ourselves at the Marshall Meadows Country House Hotel in Berwick-upon-Tweed.  Follow the link for the accommodation review. 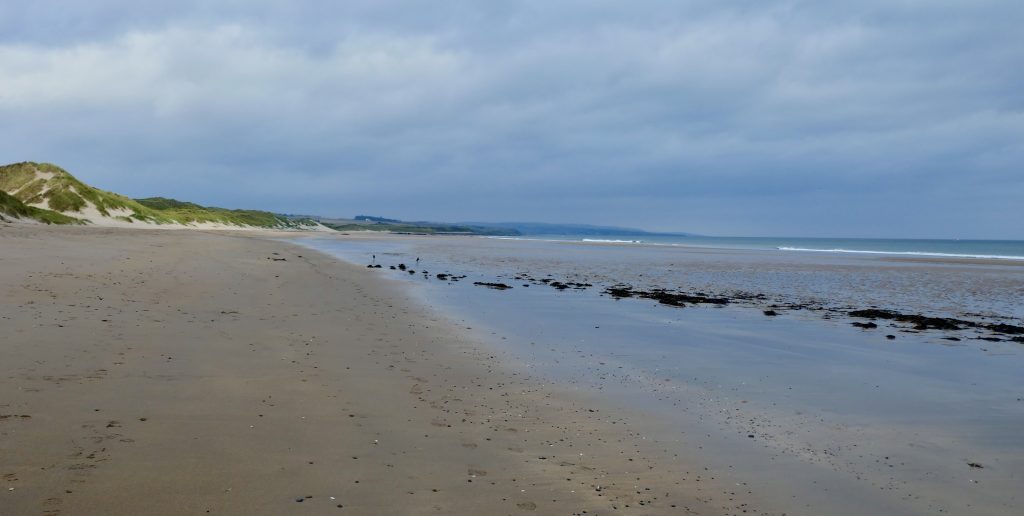 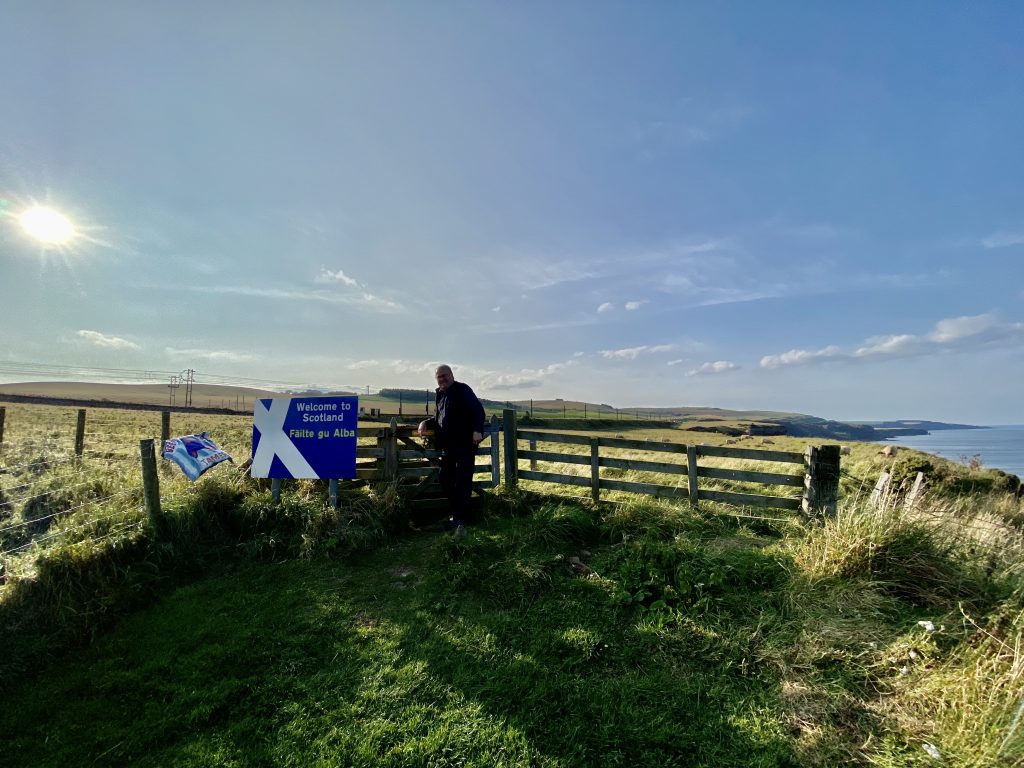 Well-heeled, Elizabethan walled Berwick upon Tweed has all the facilities you need during your stay.  The Lowry Walk around England’s most northerly town is a good way to acquaint yourself with it.  You are just 3 miles from the Scottish border here and the town’s history tells you much about the tensions between Scotland and England over the years.  Berwick is a coastal town with sandy beaches close by.

Gossick Beach is one of the most peaceful. – we had it all to ourselves when we visited.   Access is via the golf club.  You never know what you might discover on a beach walk – was this maybe a giant whale’s tooth?!

Bamburgh is worth a visit for the Grace Darling Museum.  A free museum dedicated to Northumberland’s favourite daughter.  Grace died in 1842 at the tender age of 26 from TB,  just four years after her heroism working with her father to save stranded shipwrecked sailors.  You can learn about her life at Longstone lighthouse and see the elaborately decorated tombstone dedicated to her short life in the graveyard opposite the museum.

From nearby Seahouses, you can take a boat trip to the Farne Islands.  The islands are protected by the National Trust (members can enter free of charge).  Between May and late July, you can see the puffin colony feeding their growing chicks.  The area is also a Special Conservation Area for grey seals which breed and rest here.

Seahouses is famous as the birthplace of the kipper when a split herring was left by accident on the fire overnight.

Lindisfarne – Holy Island – is only accessible via a tidal causeway from the mainland.  It is cut off completely twice a day at high tide, so you need to check your tide times before you visit.

Walking the Pilgrim’s route will take you a couple of hours, but unfortunately, you are likely to have to share it with the crowds.

Gertrude Jekyll’s small walled garden lies below the castle and is in season between July and August.

Watch out for pirri pirri which is a plant species native to New Zealand/Australia and is found throughout the dune system.  It has barbed burrs which detach from the plant and bury themselves on shoes/clothing/dogs. Keep to the paths, check for seeds and put them in a bin to prevent the spread!. 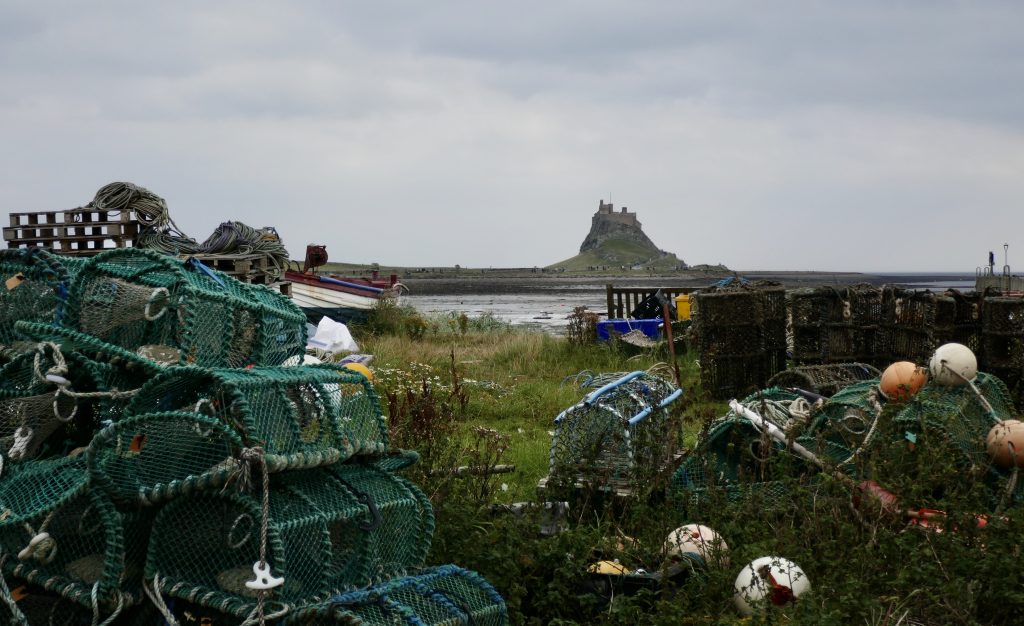 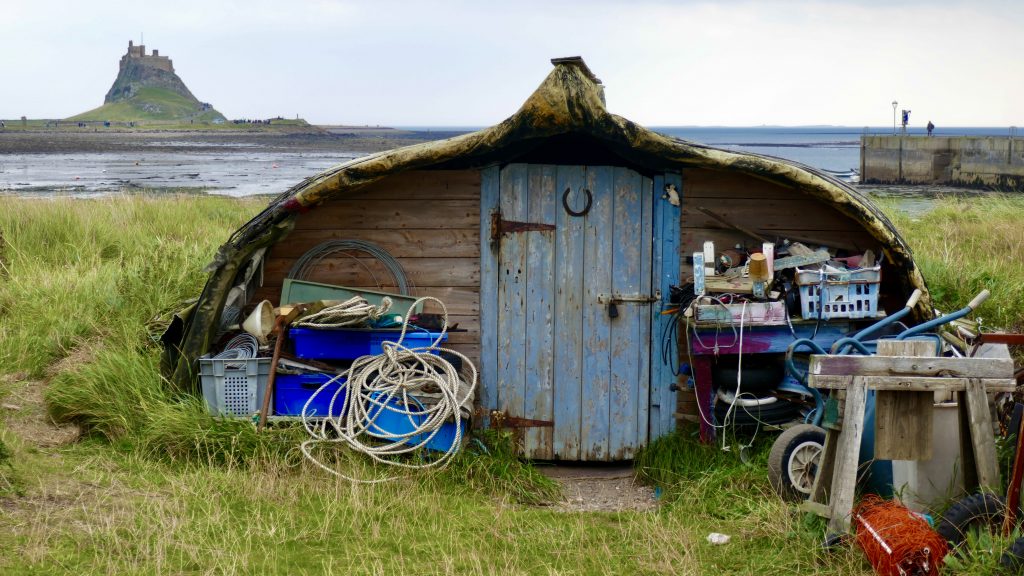 From the Scottish Seabird Centre at North Berwick Harbour, you can watch the seabird colonies on Bass Rock through carefully positioned cameras and learn all sorts of interesting things about their lives.

Flora and Fauna:  Between February and October, Bass Rock is home to 150,000 gannets – the world’s largest breeding colony.  If you are lucky, you will be able to watch a baby gannet (“guga”) trembling on the edge of the cliff knowing that he has to be brave, launch himself and fly off to adult life, learning how how to catch fish for themselves.

Once they have learned to fish, they can dive at 60 mph to catch their prey.  With a wing span up to 2 metres – they are the largest seabirds of the North Atlantic – this is quite a sight to behold.  Sadly, 75% of gannets die before becoming independent – many break their wings on impact with the ocean.

They appear to be so closely crowded together that they live on top of each other, but in fact, they guard their territory very jealously and always keep a wing span apart from each other, killing any gugas that invade this space. 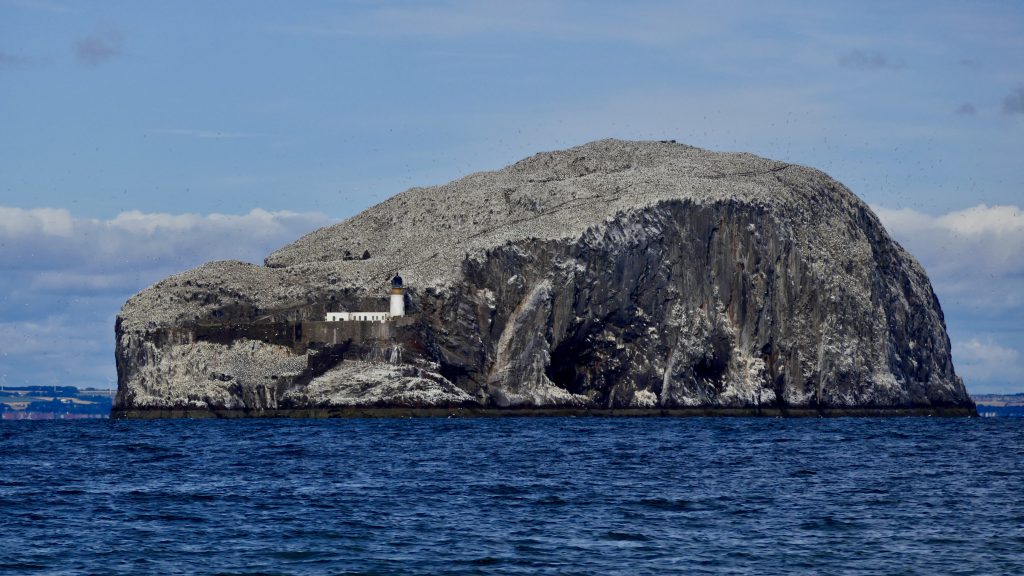 There are few better places to picnic than peaceful Seacliff Beach.  With views over to Bass Rock and Tantallon Castle, it perfectly epitomises the remote ruggedness of this most northerly part of England.

If you are partial to life’s gourmet delicacies, then a visit to Bellehaven Smokehouse is well worth the effort.  You can find salmon smoked a glorious purple red colour with beetroot or preserved in North Berwick Gin.  If you can’t get enough of it while you are here (and that may well be the case!), it is available for mail order – just follow the link below.

The little town of Eyemouth is worth a visit just to see the incredibly moving 5 metre long Widows and Bairns Sculpture.  It commemorates the fateful day of 14th October 1881 when Eyemouth lost half of its entire fishing fleet leaving 78 grieving widows and their 182 children to slowly rebuild their fishing community. 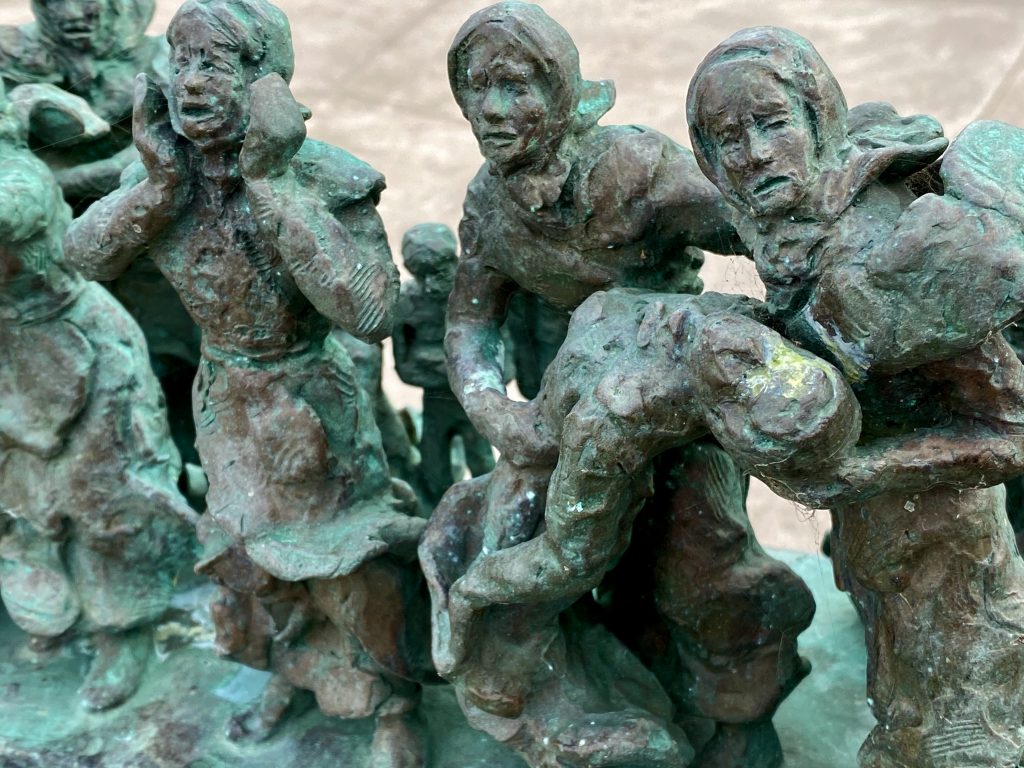 You can usually find seals bobbing around in Eyemouth harbour, waiting for you to buy a few fish to toss their way.  You can just spot the seal in the right hand corner of this photo – and the swan family sailing past was a bonus. 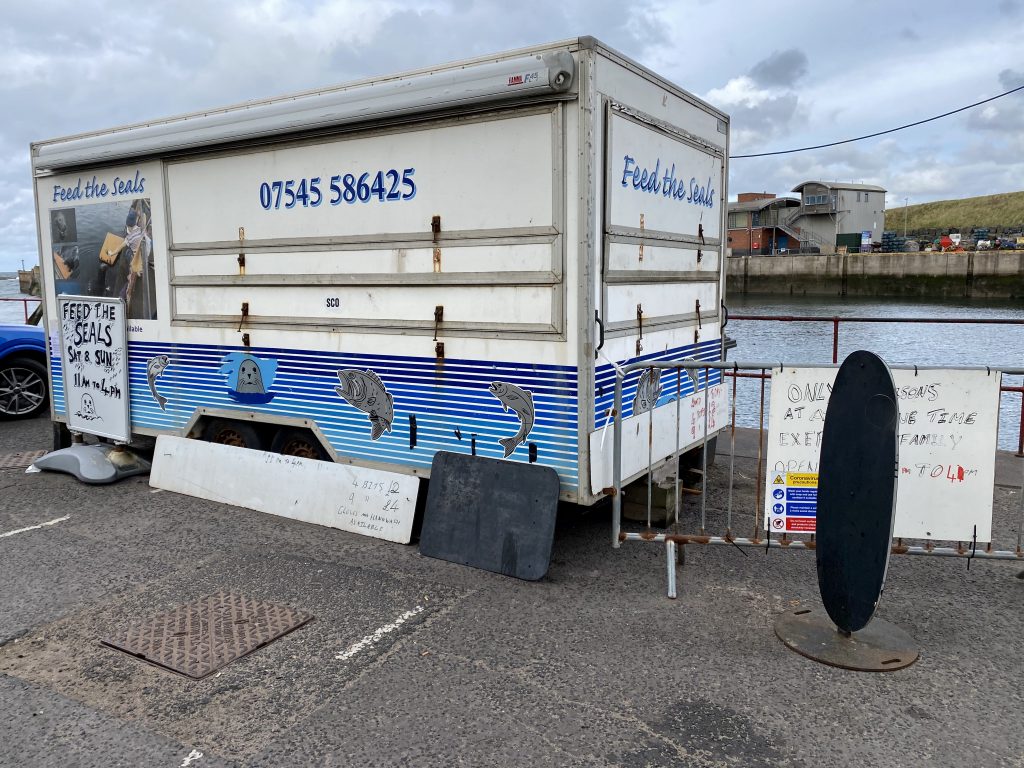 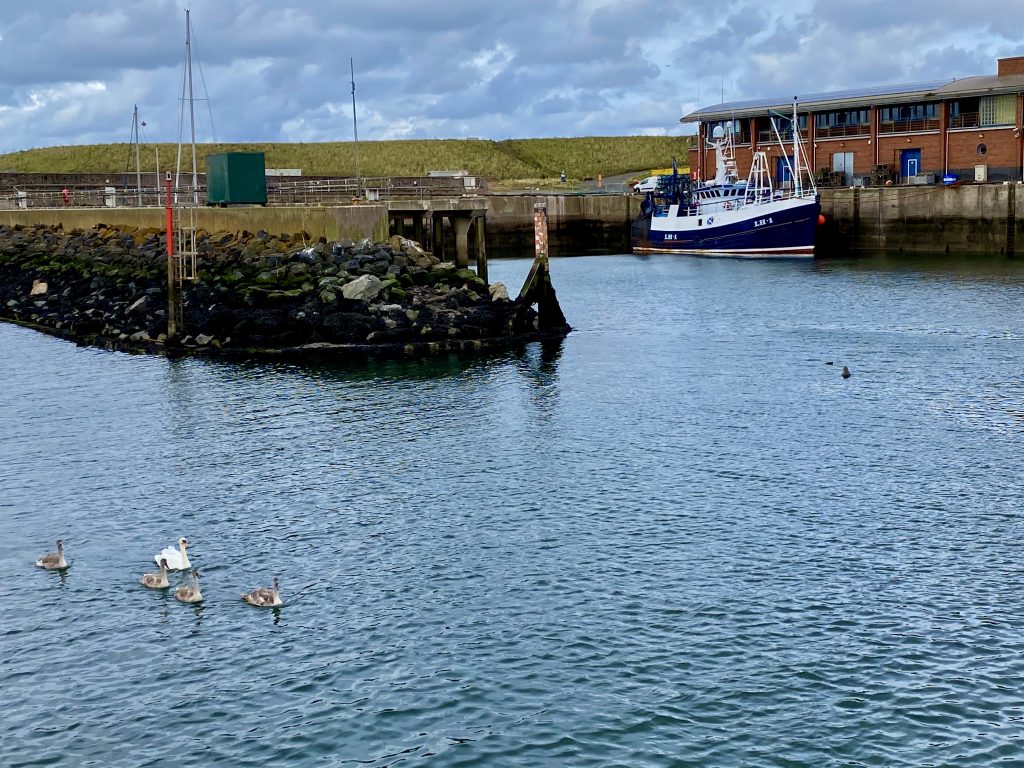 There is another very good reason to visit Eyemouth.  Don’t forget to pick up a Paradise Slice from Lough’s Home Bakery.  It is a firm favourite with the locals, but tends to sell out early on in the afternoon. 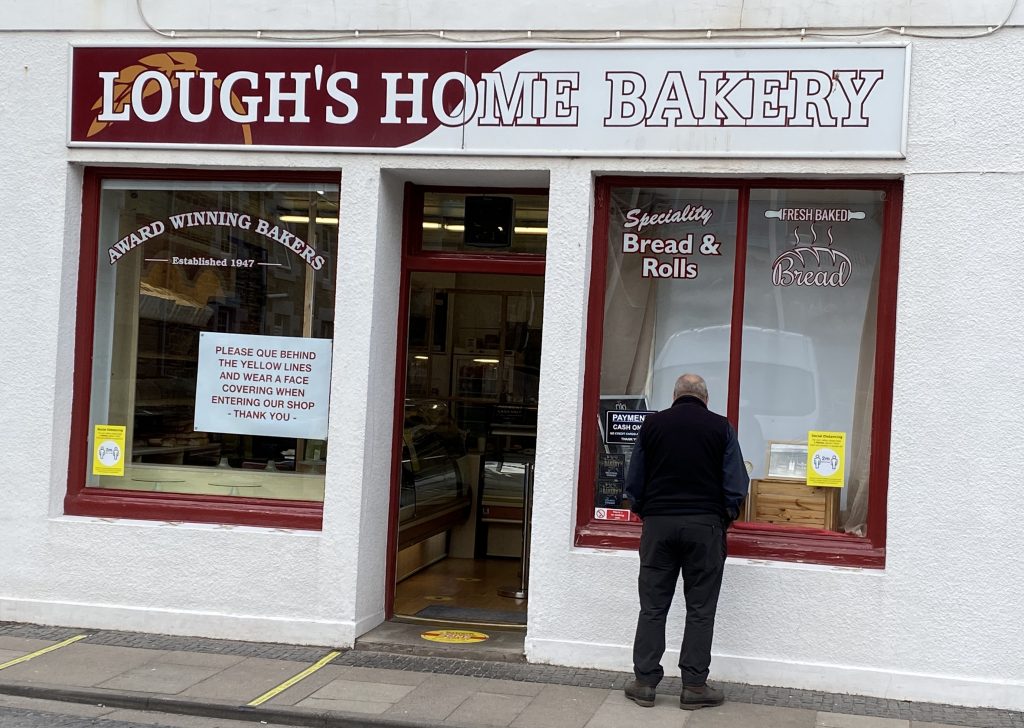 Cocklawburn is a beautiful place for a stroll along the beach and parking is (at the time of writing) free, which is always a bonus these days!  This is a place to breath deep and just gaze in admiration at the wide open big sky.

Where better to end a stay in Northumberland than stunning Embleton Beach.  It is accessed via Dunstanburgh Golf Club and there is only parking on the road.  You get a great view of atmospheric Dunstanburgh Castle from the beach. 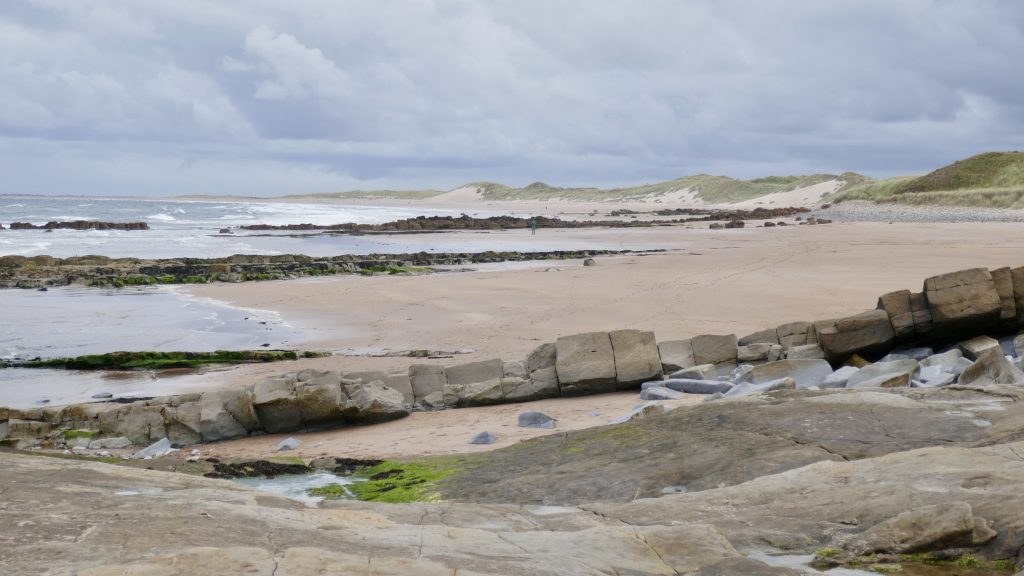 Wish I Had Seen 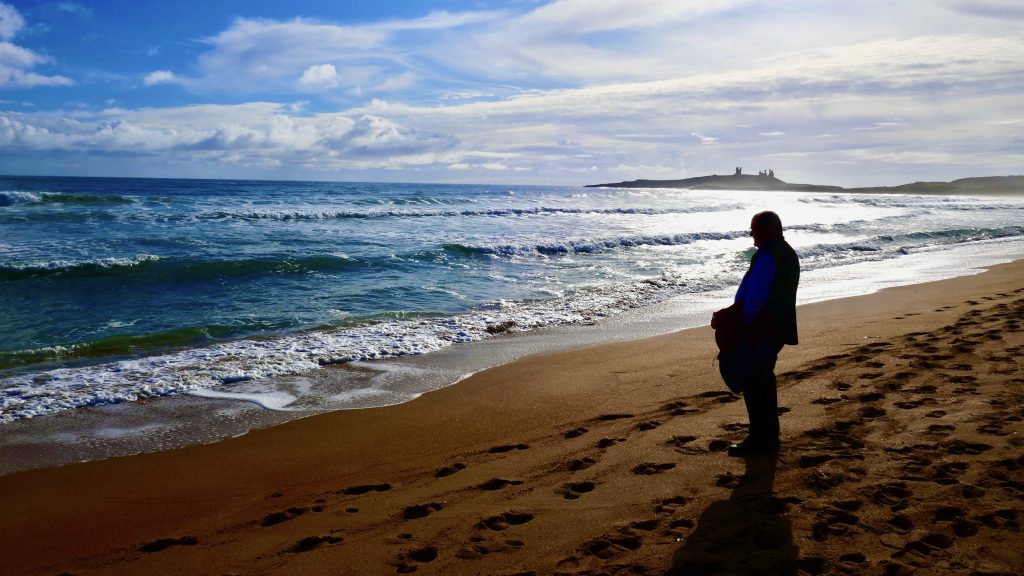