Skip to content
Love To Wander - A Travel Blog
We stayed overnight near Heathrow airport to make the 5am start on Saturday morning slightly less painful. We boarded a flight from Heathrow to Helsinki (2 ½ hours) and then another flight (1 hour) to Oulu, a town on the north-east shore of the Gulf of Bothnia. Our tour guide was actually on both flights, but didn’t introduce herself until we arrived, which I thought was a bit strange. The on board TV played rolling footage of Nordic blondes dressed in semi see-through nighties dancing around campfires in the snow and waving birch twigs at each other. Oddly, they didn’t seem to be wearing the Sorel/Kamik boots – actually, they all had bare feet?!. This was maybe the second indication that this trip would be an initiation to the strange. It kept Tim amused for the length of the flight anyway. 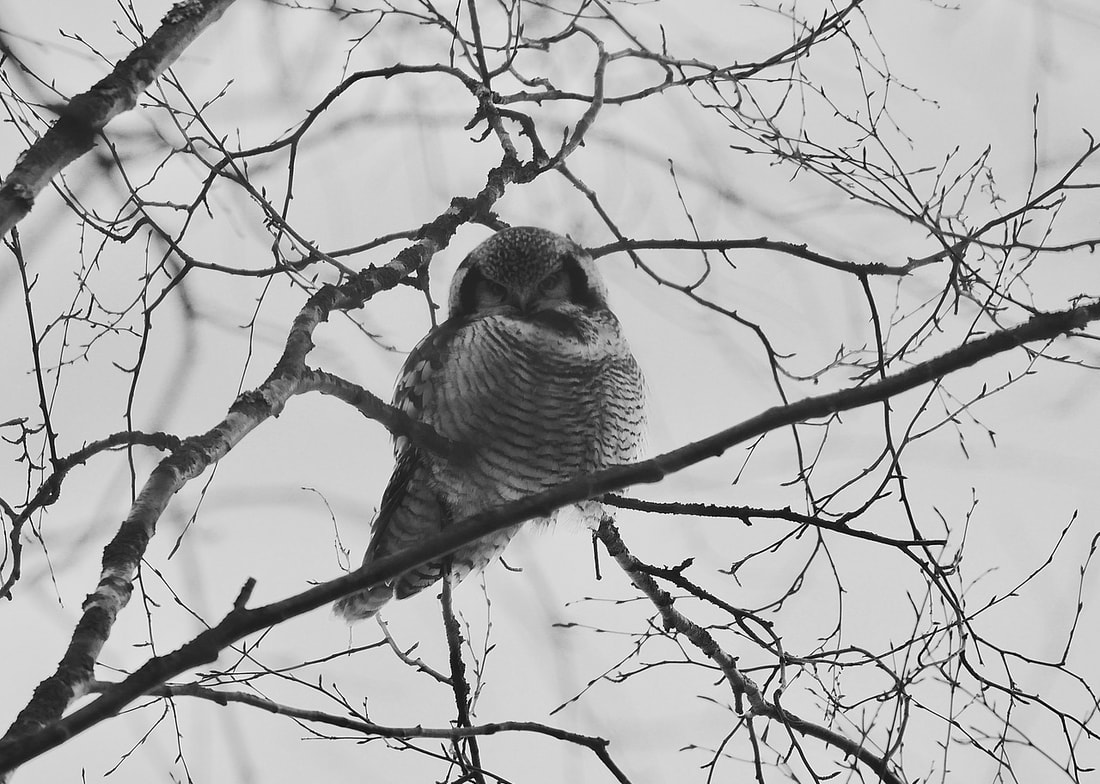 Oulu is a small town, surrounded by extensive boreal forests which are supposed to be home to many of the high Arctic bird species, in particular owls.

​The roads were covered in ice and there was a carpet of thick snow everywhere – it was hard to imagine that any birds would want to live here – what would they find to eat? It was the Easter holiday, so Oulo appeared to be mostly shut.

We were staying in the airport hotel, a short drive from Oulu airport. The hotel was nice enough – it was warm and the staff were welcoming and friendly. All the rooms were twin bedded and the neat little duvets were a perfect fit for the beds – although they didn’t seem to allow any space for a person to fit cosily underneath them? No time to explore though as we were ushered straight back into the two VW tourer vans to see a Northern Hawk Owl which was reported to be sitting at the top of a fir tree in the snowy forest some kilometres away. As we raced down the corridor, I spotted that the saunas were out of order. Shame, I could have done with warming up a bit. Why the rush, I thought – it is just one owl – and we’re going to see loads of them soon enough aren’t we? I was amazed by the amount of gear that the 14 strong group seemed to have between them. I thought the zoom lens on my camera was big – I almost didn’t pack it, because it felt a bit cumbersome and OTT. My lens is about 8” long – and was definitely in the miniature category for this trip. Some of the participants had lenses 3 – 4 ft long – the sort of kit that would have cost way more than the holiday?!

The light was beginning to fade by the time we got to the snow covered forest. The Northern Hawk Owl sat obligingly at the top of one of the tallest fir trees in the forest and – despite the failing light – I did manage to get a photo of him, although it was so cold that I hard to work hard to make my finger press the shutter button. With hindsight, this eventually turned out to be the highlight of the whole trip!

Back to the hotel for dinner, a sweet pepper soup, reindeer in a sauce (not named) and chocolate cake and ice cream. There was no choice – but the food was hot and tasty. So – maybe time to have a drink or two around a cosy log fire and get to know our tour group a bit then? No chance – we were herded back into the vans to go in search of the elusive Great Grey Owl. The temperature was dropping fast now and there was very little light. Even if the owl had appeared, I don’t think we would have got a good view of it. We trudged through dark, icy cold forests and huddled around a group of fir trees for quite a while as the Finnish guide played a tape of owl calls in a vain attempt to attract the Great Grey. No chance to get to know the group any better during the cold wait of course, because there was a strict “NO TALKING” policy in force to ensure there would be no distraction for the non-existent birds. I could only feel 4 of my 10 toes by this stage, despite wearing two pairs of socks and insulated wellies. My hand had ceased to function at all – even pulling my woolly hat over my ears was difficult. My camera had run out of battery because of the extreme cold, although I had taken very few photos. Crikey – this wasn’t what I was expecting at all!

Despite the fact that we had stood around in sub-zero temperatures for a very long time and seen nothing, no-one seemed particularly bothered. The sighting of the Northern Hawk Owl seemed to keep people going. It was about this point when I realised that I was probably on the wrong holiday. This was going to be a very long week-end …

Can this get any worse? Yes – it can!