Skip to content
Love To Wander - A Travel Blog
Today, we boarded a bus and then a small boat to take us to Neet’s Bay. There is a not-profit-salmon hatchery based there, which makes it good territory for bear tracking. Keeping a plentiful supply of salmon going is very important to the isolated communities in this area, which is known as the salmon capital of Alaska. Apart from providing a good food source generally, there is money t be made from sport fishing, which is a popular passtime here.  We saw a large black bear almost immediately we arrived at the bay. 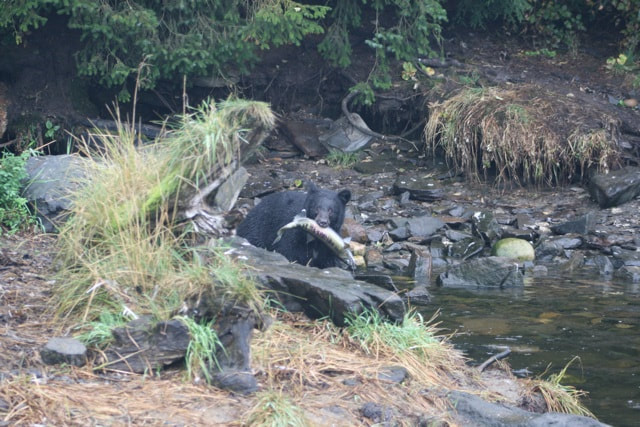 Although the small boat was very close to the coast, the bear seemed totally not bothered by either us or the seagulls that at times surrounded him.  He was just interested in finding salmon. It was between salmon runs and the silvers had not yet started, but there still seemed to be plenty of fish in the sea. A couple of float plane expeditions annoyingly joined us at this point, drawn by the sighting of the bear. They soon left us to it after the first bear had been and gone though.

The bears were fascinating to watch and because they moved more slowly than some of the other wildlife we had seen so far on the trip, we could concentrate more on just watching them than trying to photograph them, which was welcome. They ate the salmon whole, spitting out the tail. The salmon jumped from time to time and I was fortunate enough to be able to capture this on video while the bear was feeding. They are huge creatures, but surprisingly agile and able to climb trees and run quickly as well as swim. ist of the time though, they see to amble round slowly, looking for their next snack of berries or salmon. In Summer, they are really a content eating machine – a bit like some of our fellow cruise passengers (!)

The weather began to clear and we saw seals and sea lions swimming in the bay – such beautiful colours. Then we spotted an eagle and managed to get a few shots of him in flight. The boat trip back was peaceful, admiring the mist gracefully draping itself over the forests lining the sea.

Dining at the Chef’s Table