Skip to content
Love To Wander - A Travel Blog
A 5am start was scheduled again, with the promise of seeing grouse. We gave it a miss and had a bit of a lie in. Breakfast was much more sparse at this hotel than the previous one. There was no bacon and the scrambled eggs were cold. At least the coffee was good and hot. Those who had gone on the grouse hunt returned at 9ish for their breakfast. With the temperature falling to -14, they needed it. Did we make the right decision not to go – or did we miss the highlight of the holiday and risk kicking ourselves for the rest of the trip? They saw very little. Two red grouse eventually showed up – but not everyone actually got to see them – and there was certainly no excitement of a lek as had been promised. So, it was a good call not to go. 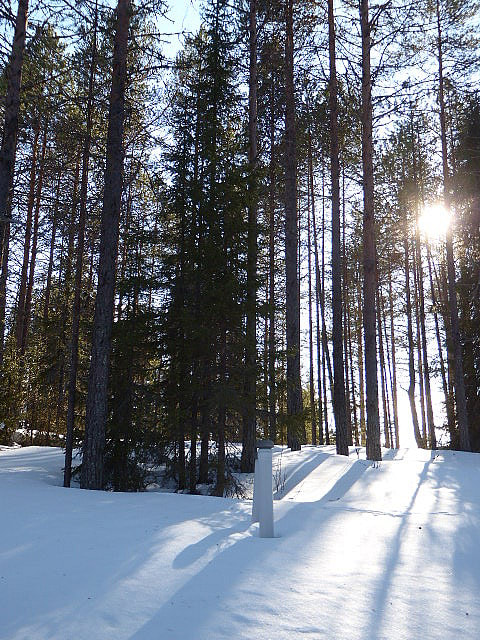 Then, we were “IN” the vans again.  We drove through deeper and deeper snow up to a ski resort. We climbed for over an hour up hill in deep snow, keeping left to avoid the skiers sweeping past us on our right, irritated by our group. None of the skiers responded to our attempts at a cheery “Hallo!”  When we got to the top, our Finnish guide spoke his longest word of the trip so far “Capercaillie”. He put on snow shoes and went off into the forest in search of the bird. I’m not sure what the plan was if he had found it, because the snow was too deep for anyone to follow him without snow shoes? Was he seriously planning to beat it all the way down the path to where we were standing? Maybe he had just found a hut in the forest, settled in and made himself cosy for a bit? We stood in the cold for about 45 minutes and then, our guide returned. Guess what – yep – no Capercaillie!

The hotel had given us some packed lunches – I saw them get packed into the van, so I knew they were there! It was 1.30pm now though, and no-one had mentioned lunch? We drove deep into the snow covered forest and found a log cabin with a bird feeder in the garden. I was getting acclimatised to this now – I was beginning to get the drift. I would normally feel pretty uncomfortable about parking up by someone’s private house, standing in their garden and looking at their bird feeder, but desperate times call for desperate measures. Someone joked that, if asked, we could say we were Jehova’s Witnesses! We saw – wait for it – nothing. Reversing out was difficult. It was 3pm now – still no mention of lunch. We eventually stopped by another bird feeder and unwrapped the lunch. I can’t say that a plastic box full of iceberg lettuce, half a tomato and a gherkin really hit the spot for me? There were some flasks of coffee and tea, but they had gone cold, so we didn’t drink them.

We re-traced our steps to the same layby that had yielded the Siberian Jays yesterday. They did turn up again – but there was little interest (they had already been ticked off everyone’s lists). I was quite happy to see them as I actually managed to get a photo this time. A raptor was spotted in the distance – great excitement. I had a pair of pocket binoculars that weren’t powerful enough to see the bird in any detail at all – anyway – my hands were too cold to hold them.

We stopped by some water – a rare sight in this frozen land which gave some welcome relief to the monotony of the scenery. Whooper Swans and Goosander were swimming on the lake and there were apparently Snow Bunting behind them, although they were far too small for me to make out. While I was looking through my binoculars though, I did see a very strange sight on the other side of the lake. There was a woman in a blue robe and as I watched, she shed the robe and slid naked into the icy lake for a swim.  Truly unbelievable – that cannot be good for you?! It must be a fairly common pastime though as I saw several comic postcards of chubby, bikini clad swimmers in the garage service station.

We drove right up to the Arctic Circle in the afternoon, which took a long time, but it was sort of satisfying to be able to say we had actually been there and could justifiably put a pin in the map. Scary thought – if I am getting satisfaction from putting a pin in a map, maybe there is something of a twitcher in me? Let’s move on …

​The visitor centre was shut (of course – you knew that before I told you). The sun did come out for a bit and I got a photo that resembled something like the images I had been hoping to capture when we booked this trip. The long awaited Siberian Tit also showed up – eventually.

We returned to the hotel at 6 after another very long drive. Dinner was marginally better tonight – iceberg lettuce salad (why on earth is it so popular here?!), chicken in a spicy sauce of some kind, and a tinned par with jam. The staff were keen to shut the restaurant, so we were told it was closed at 9 and the lights were turned off, just to reinforce the point. Time for another early night then!

Easter on the Arctic Circle