Skip to content
Love To Wander - A Travel Blog
Juneau is the capital of Alaska with a population of 30,000 people and accessible only by sea or air because of the mountains and huge ice field that surround it. it was a rainy day today and fog obscured the best of the views of Mendenhall Glacier. I spotted an eagle looking at the glacier with me – he was probably about as impressed with the fog as I was. The photo sums up the morning really – it would have been so much better if the sun had been out. 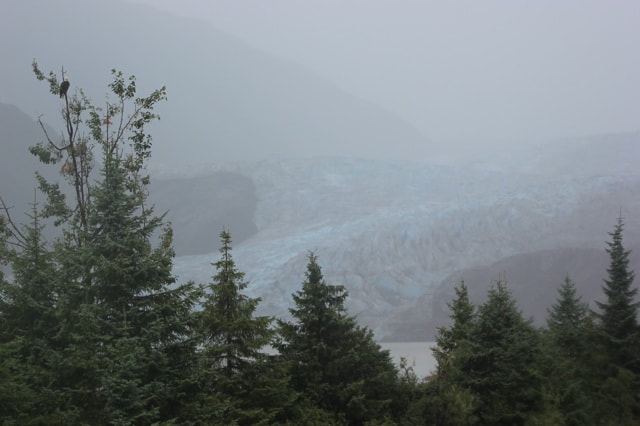 On the bus ride out to the glacier, we saw a n interesting set of photos taken every day at the same time for 365 days running. when run together into a sequence, you could see the glacier slowly moving and falling into the sea.  Without this sort of evidence, it is hard to accept that these huge blocks of ice are constantly moving.

We were given some tips about how to “pop the blues” of the glacier in our photos – adjusting the white balance to sunny. It would have worked fine a few days ago on Hubbard Glacier, but not so useful a tip today.

We walked through temperate rainforest to get to the glacier. The greens of the grass hummocks of spagnum moss were “popping” nicely in the heavy rainfall, but it was difficult to capture this well with heavy rain pouring onto the camera all the time. We saw a porcupine in a tree – another first for me – but he was curled up in a ball, keeping dry, so not the best photo opportunity either.

The whale watching was much more rewarding though. We saw a pod of Orca whales first.  They came so close to our little boat and were about the same size as the vessel – it was pretty amazing. The captain of the ship running the tour was pretty excited too – it is unusual to see this many whales together and up so close. “Who wants to be the first to touch them?” He shrieked! We saw Humpback whales next, which are about three times larger than the Orcas. They surface for a short spell and then dive down into the water again, pulling their huge tail gracefully behind them as they go. Whale watching requires a lot of patience. Typically, once you have located a whale, you have to wait for it to surface and then – if you want to photograph it – judge carefully how long it might take for its tail to surface so you can get an interesting shot. Judge it wrong and your camera will run out of steam just before the interesting shot comes into view. We got a lot of pictures of empty sea – thank goodness for digital cameras – this would have been a potentially pretty frustrating trip in the old days! Once I had managed to take a reasonable tail shot photo, I was content to settle downs and watch these massive creatures wallow gracefully around us in their natural habitat – it was awe inspiring.